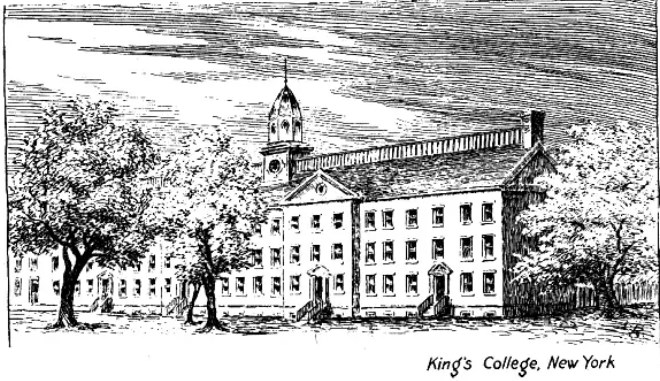 The old Commons in Lower Manhattan is today’s City Hall Park. It was near King’s College where Alexander Hamilton took classes before his participation in the American Revolution.

John Adams’ 1774 description of this area of the city to takes us back in time: We…walked up the broad Way, a fine Street, very wide, and in a right Line from one End to the other of the City.  In this route we saw the old [Trinity] Church, and the new Church [St. Paul’s Chapel].  The new is a very magnificent Building—cost 20,000 Pounds New York Currency.  The prison [in today’s City Hall Park] is a large and handsome stone Building.  There are two setts of Barracks.  We saw the New York [King’s] College, which is also a Stone building.

The Commons is where people assembled in celebration or in protest of government laws and actions.  It was the eighteenth-century equivalent of today’s Times Square.  Many important events took place here, including the first New York City public reading of the Declaration of Independence on July 9, 1776.  It was also here–in a celebration of Parliament’s repeal of the Stamp Act–that the first of five Liberty Poles was erected. There is a replica Liberty Pole in City Hall Park today. We see this area on the Hamilton & Washington walking tour.