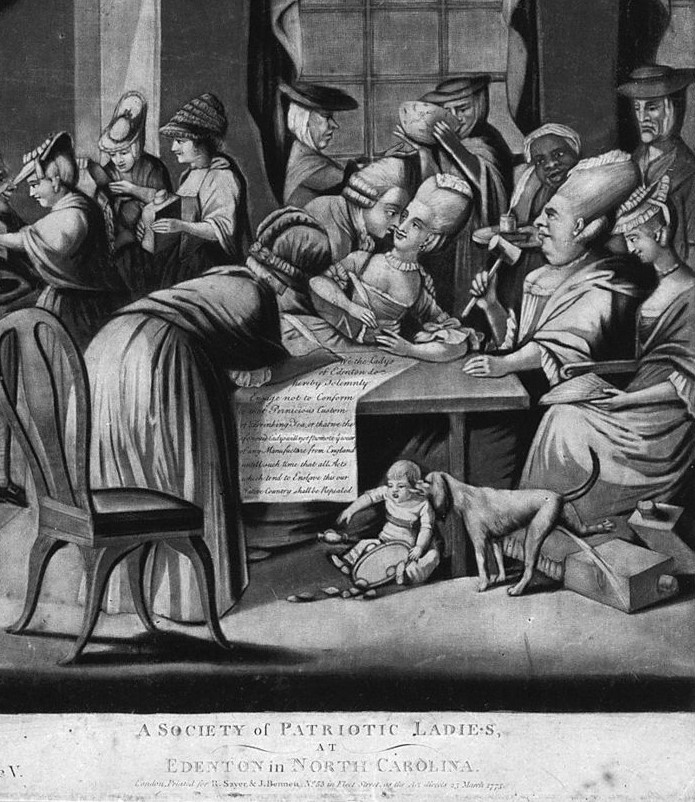 In solidarity with the radical Sons of Liberty, women in New York and other colonies organized as the Daughters of Liberty, using the power of the purse to reject English goods such as tea and cloth.  Wives, mothers and daughters created a sisterhood of solidarity: they advertised in newspapers and organized “spinning bees” to create homespun and teach the craft to the uninitiated.[i]  Together with “a fighting army of amazons…armed with spinning wheels” they hoped to found “a new Arcadia.”  This was the aspirational language used by Charity Clarke, a young lady in New York City to describe her vision to a cousin in London.[ii]  “Though this body is not clad with silken garments,” she wrote to him, “these limbs are armed with strength, the Soul is fortified by Virtue, and the Love of Liberty is cherished with this bosom.”[iii]  The idealism of women like Clarke expressed feminine empowerment in this new political arena.

In 1767, the New-York Gazette published the “Address to the Ladies” originally circulated in Boston.  In response to the recent Townsend Acts, it encouraged women to take action, to do their own “Manufact’ry,” make that the new fashion, and choose Labradore North American herbal tea over British East India tea.  Playing into gender roles of the era, the writer promises an amorous reward for compliance:

Throw aside your Bohea, and your green Hyson tea,

And all things with a new fashion duty;

Procure a good store of the choice Labradore,

These do without fear and to all you’ll appear

Tho’ the times remain darkish, young men may be sparkish

And love you much stronger than ever. [iv]

Though humorous, these creative submissions encouraged women to change their habits in service to the cause of liberty.

Once the war began in 1775, women became even more vital to the Patriot cause by producing saltpeter for gunpowder, holding scrap drives, melting down metal from pewter plates, lead window weights, and a statue of King George III in New York’s Bowling Green into ammunition, fundraising for the army, and spinning soldiers’ uniforms on their wheels and looms.  In 1778 and 1779, compliance became law as New York passed emergency legislation called an “Act to Procure Shoes and Stockings for the New York Troops.”  Patriotism was now compulsory as fines were imposed on women who did not meet their quotas.[v]

Women in New York, like their New England counterparts, were leaders in supporting the war effort until the British occupation of the city at the end of 1776.  Their participation was acknowledged along the way.  For example, a 1769 accolade in a New York newspaper credits the efforts of women: “[their participation] kindled a spirit of generous Emulation” and they hoped that “the same Spirit will spread thro’ the Continent.. . .That the Ladies while they vie with each other in Skill and Industry…may vie with the men, in contributing to the Preservation and Prosperity of their Country, and equally share the Honour of it.”[vi]  Just a few years before, a public statement acknowledging and commending the participation of women in service to their country would have been almost unimaginable.  While these women participated as civilians, other women served the military—this being a homefront war—and the next stop will cover many of their contributions.