On the Brooklyn walking tour, you will see the great Plymouth Church originally lead by the “most famous man in the world” Henry Ward Beecher.  In 1860, Beecher, and ardent abolitionist (whose sister was Harriet Beecher Stowe, was the author of “Uncle Tom’s Cabin”) invited the relatively unknown Abraham Lincoln to speak at the church.  Lincoln accepted the $200 invitation and attended services there, but because of the large demand, gave his “Right Makes Might” speech in the Cooper Union in (what is now) the East Village instead.  The pew in which Lincoln sat in the Plymouth Church is marked with a plaque which is in the photo here. 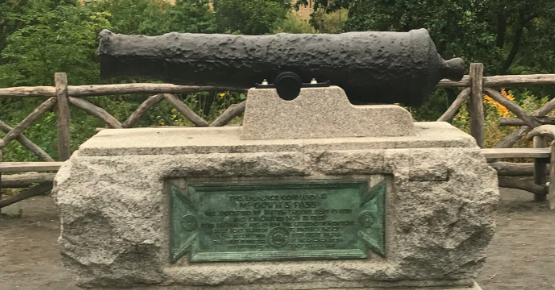 While exploring the Revolutionary War/War of 1812 forts on the Secret Places of Central Park tour you’ll come upon a fortification which includes a genuine British cannon from the Revolutionary War.  Salvaged from the H.M.S. Hussar after shipwrecking off the East River in 1780, it was eventually donated to Central Park.  After being put into storage for a number of years, the Central Park Conservancy, in their plans to restore the Revolutionary War/War of 1812 fortifications, planned to put the artillery piece back on display.  While restoring it in 2013, they found a cannonball, wadding, and frighteningly enough, over a pound of gunpowder, making this, in theory, a still-loaded cannon since 1780.  The Bomb Squad were called to remove the explosive material, and eventually, it was put back on display for you to see!