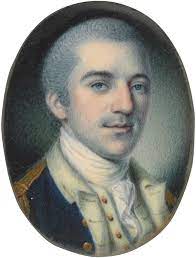 South Carolina’s Revolutionary abolitionist, Lieutenant Colonel John Laurens, was Alexander Hamilton’s closest friend. On August 15, 1782, two years after they fought together at the victorious Battle of Yorktown, Hamilton wrote to Laurens with news of his delegation to Congress and a desire to convince Laurens to join him in realizing their mutual political objectives in the newly independent United States. It is not likely that Laurens ever read that letter as he was sadly killed at the Battle of the Combahee River on August 27, 1782.

I received with great Pleasure, My Dear Laurens, the letter which you wrote me in last.

Your wishes in one respect are gratified; this state has pretty unanimously delegated me to Congress. My time of service commences in November. It is not probable it will result in what you mention. I hope it is too late. We have great reason to flatter ourselves peace on our own terms is upon the carpet. The making it is in good hands. It is said your father is exchanged for Cornwallis and gone to Paris to meet the other commissioners and that Grenville on the part of England has made a second trip there, in the last instance, vested with Plenipotentiary powers.

I fear there may be obstacles but I hope they may be surmounted.

Peace made, My Dear friend, a new scene opens. The object then will be to make our independence a blessing. To do this we must secure our union on solid foundations; an herculean task and to effect which mountains of prejudice must be levelled!

It requires all the virtue and all the abilities of the Country. Quit your sword my friend, put on the toga, come to Congress. We know each others sentiments, our views are the same: we have fought side by side to make America free, let us hand in hand struggle to make her happy.

Remember me to General Greene with all the warmth of a sincere attachment.

After hearing the news of Lauren’s death, Hamilton wrote to Major General Nathanael Greene on October 12, 1782:

“I feel the deepest affliction at the news we have just received of the loss of our dear and ⟨inesti⟩mable friend Laurens. His career of virtue is at an end. How strangely are human affairs conducted, that so many excellent qualities could not ensure a more happy fate? The world will feel the loss of a man who has left few like him behind, and America of a citizen whose heart realized that patriotism of which others only talk. I feel the loss of a friend I truly and most tenderly loved, and one of a very small number.” (2)