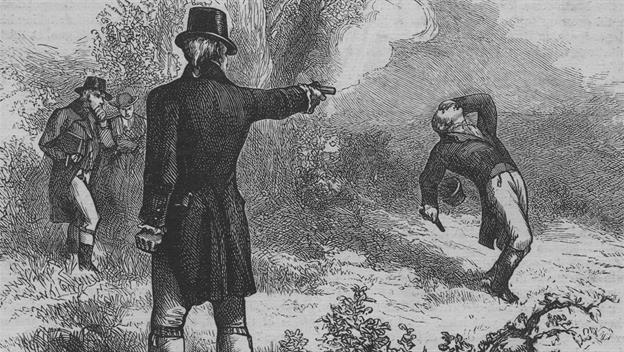 On the morning of July 11, 1804, Alexander Hamilton along with his “second,” Nathaniel Pendleton, and a doctor, Dr. David Hosack, rowed to Weehawken, New Jersey.  Vice President Aaron Burr and his second, W. P. Van Ness, had already arrived. Underbrush had been cleared to provide room for the dueling ground.  Although neither had seen the duel (to avoid being accomplices in a potential murder), Pendleton and Van Nass eventually collaborated on the details of the event before and after the discharge of the guns:

“Colonel Burr arrived first on the ground, as had been previously agreed. When General Hamilton arrived, the parties exchanged salutations, and the seconds proceeded to make their arrangements. They measured the distance, ten full paces, and cast lots for the choice of position, as also to determine by whom the word should be given, both of which fell to the second of General Hamilton. They then proceeded to load the pistols in each other’s presence, after which the parties took their stations. The gentleman who was to give the word then explained to the parties the rules which were to govern them in firing, which were as follows:

The parties being placed at their stations, the second who gives the word shall ask them whether they are ready; being answered in the affirmative, he shall say- present! After this the parties shall present and fire when they please. If one fires before the other, the opposite second shall say one, two, three, fire, and he shall then fire or lose his fire”

To be continued in part 2…