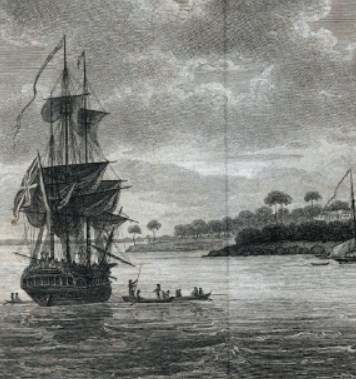 Boston King was an enslaved African American born in 1760 in South Carolina. With a British proclamation offering freedom to the enslaved (belonging to Patriots) for fighting with the British Army, King risked his life to escaped. After his self-liberation, he was captured by the Americans. He escaped again and eventually secured his freedom for his British service. In 1783, he left New York City for Canada on a British ship at the end of the war. He eventually helped to found Freetown in Sierra Leone. This is an edited excerpt from his memoirs published in 1798 in The Methodist Magazine.

When I arrived at New-York, my friends rejoiced to see me once more restored to liberty… in 1783, the horrors and devastation of war happily terminated, and peace was restored between America and Great Britain, which diffused universal joy among all parties, except us, who had escaped from slavery and taken refuge in the English army; for a report prevailed at New-York, that all the slaves, in number 2000, were to be delivered up to their masters, altho’ some of them had been three or four years among the English. This dreadful rumour filled us all with inexpressible anguish and terror, especially when we saw our old masters coming from Virginia, North-Carolina, and other parts, and seizing upon their slaves in the streets of New-York, or even dragging them out of their beds. Many of the slaves had very cruel masters, so that the thoughts of returning home with them embittered life to us. For some days we lost our appetite for food, and sleep departed from our eyes.

The English had compassion upon us in the day of distress, and issued out a Proclamation, importing, That all slaves should be free, who had taken refuge in the British lines, and claimed the sanction and privileges of the Proclamations respecting the security and protection of Negroes. In consequence of this, each of us received a certificate from the commanding officer at New-York, which dispelled all our fears, and filled us with joy and gratitude. Soon after, ships were fitted out, and furnished with every necessary for conveying us to Nova Scotia. We arrived at Burch Town [Birchtown] in the month of August, where we all safely landed. Every family had a lot of land, and we exerted all our strength in order to build comfortable huts before the cold weather set in.