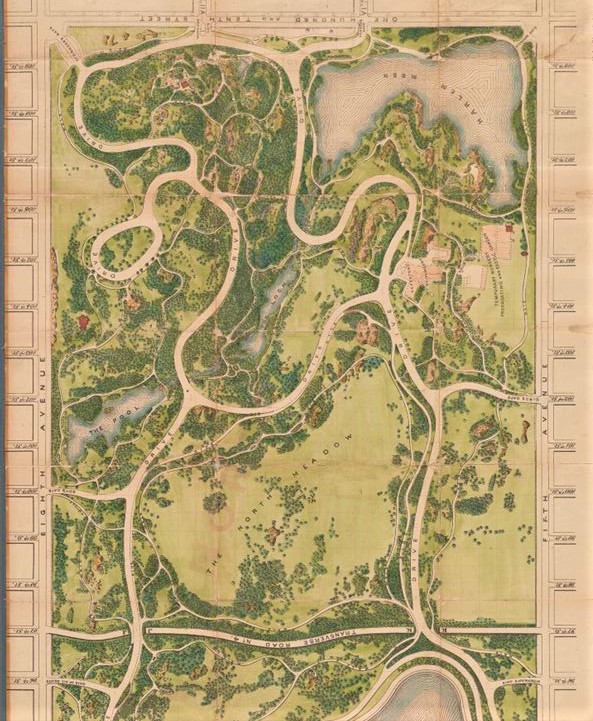 The Creation of Central Park

In 1844, lamenting the lack of public areas in New York City for “health and recreation,” William Cullen Bryant, the romantic poet, journalist, and editor of the New-York Evening Post, advocated for “an extensive pleasure ground.”[1]  A few years later, the most prominent landscape gardener in the United States, Andrew Jackson Downing, wrote a public letter commenting that “What are called parks in New-York, are not even apologies for the thing.”[2]  Downing believed that a great park would boost New York’s standing with European cities and elevate the working man to a gentleman.[3]  Initially, the city looked to purchase a privately-owned 153-acre tract of land along the East River called Jones’ Wood, but in 1853, the city used eminent domain to acquire a less expensive, more centrally located 778-acre plot—expanded to 843 acres ten years later.[4]  The park would also protect wealthy, uptown landowners from further incursion by immigrants and African Americans and remove the approximately sixteen hundred “poor and wretched people” already settled there.[5]  An October 1857 advertisement in the New York Herald announced a design competition for the park.[6]  The winners were the team of journalist Frederick Law Olmsted, recently appointed Superintendent of the parkland, and the British-born architect Calvert Vaux, protégé of the recently deceased Downing.  Their plan was named “Greensward.”  Vaux wrote that their mission was to “translate Democratic ideas into Trees and Dirt” in creating a public park to serve the diverse, divided, and growing metropolis.[7]  In 1857, Olmsted was appointed Park Superintendent and Architect-in-Chief.  Construction began the following year during the Panic of 1857, providing work for thousands of unemployed laborers—20,000 by 1866.[8]  Together, Olmstead and Vaux managed the ambitious transformation of hundreds of acres of hilly, rocky, and swampy land into a fully-designed naturalistic landscape and the first large-scale urban public park in the United States.  Olmsted was confident that his artistic creation would alleviate many of the ills of urban life and calm the “rough element of the city.”[9]

In the 1973 FLO: A Biography of Frederick Law Olmsted, Laura Wood Roper, with cooperation from Olmsted’s son, set out to revive the co-designer’s status after it had “fallen upon neglect.”[10]  She describes his “almost religious belief in democracy” and his desire for “communicativeness,” which “distinguished the civilized man from the barbarian.”[11]  According to Roper, communicativeness involved creating community “regardless of regional, class, economic, color, religious, or whatever differences.”[12]  For Olmsted, this union of diverse people was “the essence of democracy,” a justification for the park’s creation, “and the last, best hope of earth.”[13]  By Roper’s account, Olmstead believed that government should play a role in encouraging “taste and refinement,” and public parks and gardens could serve that purpose.[14]  Besides being a pleasure ground for the wealthy, the park would be a means of cultivating genteel standards of good taste and behavior in the working class.[15]  According to Roper, under Olmsted’s guidance, landscape design went from “decorative to social aims,” and his work in civilizing urban life for the benefit of all people “constituted a heroic undertaking.”[16]  The biography set a standard for other works in the 1970s in telling the story of the park from Olmsted’s perspective.

Elizabeth Barlow’s Frederick Law Olmsted’s New York, published in 1972, and the companion to a retrospective celebrating Olmsted’s work, also adheres to the narrative of the designer’s reformer and democratic ambitions.  In Jeffersonian terms, Olmsted wrote that the government’s primary responsibility was to protect citizens in their “pursuit of happiness” against impediments “otherwise insurmountable.”[17]  Barlow states that he believed that public parks could serve that purpose and “humanize the city.”[18]  Both Roper and Barlow take a “great man” approach to Central Park’s history.  In the following decade, historians responded to the 1970s biographies, separating the park from Olmsted’s stated democratic ambitions and exploring it through social history.

Explore this history and more on the Secret Places of Central Park walking tour!